Our mission: Dawson School is dedicated to excellence of mind, body, and character. We prepare students, through challenging and relevant learning, to become creative, resilient problem solvers who bring their best to the world.
At A Glance
History 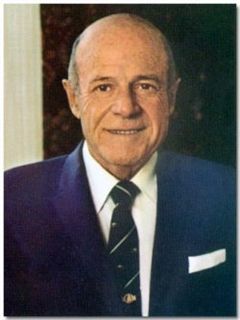 G.B. (Jerry) Henderson, founded the Alexander Dawson Schools. A philanthropist and entrepreneur, he was fascinated by technology, education, and innovation.
Those of us who knew Jerry Henderson are not at a loss for stories. Jerry made things happen, and two great things he made happen are the schools that bear his father’s name. Most of the young men and women who attend and have attended the Alexander Dawson School know Jerry only by name and by the statue in the circle outside Henderson Hall. The alumni who were fortunate enough to have known Jerry in the early days of the school remember a man of great warmth, deep convictions and strong opinions. Those of us fortunate enough to have worked for him remember a man of insight, imagination and tenacity.

Girard Brown Henderson was born on February 25, 1905 in Brooklyn, New York, the younger son of Alexander Dawson Henderson, Sr. and Ella Brown Henderson. Alexander Dawson Henderson was vice president and treasurer of the fledgling California Perfume Company. David McConnell, a bookseller specializing in the works of Shakespeare, started the company when he realized the free samples of perfume he gave to customers were more popular than the books he tried to sell. Alexander Dawson Henderson joined the company in 1895 after answering a want ad for a bookkeeper.
Jerry grew up in Suffern, New York, about 35 miles from New York City. The family moved there not long after Jerry was born, settling in a large, Georgian-style home on a hill near the Nyack Turnpike. Upon graduating from a prep school in upstate New York, Jerry was accepted to Dartmouth University, but he left in the middle of his freshman year. Jerry wrote that the headmaster of his prep school was better at getting graduates into the Ivy League than the school was at preparing graduates to succeed in college. He said it was a bitter disappointment.

Disenchanted with higher education, Jerry went to work as, in his words, a shipping clerk for a silk company, standing eight hours a day, cutting and filling orders for clothing manufacturers. In 1925, Jerry’s father died. The family had stock in the California Perfume Company, but it had never paid dividends, and the family had no income. To make ends meet, Jerry left the silk company for a better job selling aluminum pots and pans door to door. He even learned to cook in order to demonstrate the merchandise.

Jerry married Theodora Gregson Huntington in 1927. They settled in Mahwah, New Jersey and had two daughters. Married now, Jerry decided stocks were easier to sell and lighter to carry than pots and pans so he accepted a job as a stockbroker in 1928. In 1929, the stock market crashed on Black Tuesday, triggering the Great Depression. Jerry lost his job, his house and his savings. The stocks he had sold his family and friends were worthless. Broke and with a wife and baby to support, Jerry kept plugging. He refused to declare bankruptcy and got a job selling insurance. Eventually he paid all his debts.
At the beginning of the Second World War, Jerry moved down to South Carolina. He formed a group of Sea Scouts, and together in Jerry’s two-masted schooner they patrolled the Carolina coast for U-boats. They never came across any, fortunately.

The family had always held on to its shares of the California Perfume Company, and Jerry and his brother, Alexander Dawson Henderson, Jr., were major stockholders. In 1939 the company changed its name to Avon Products, Inc., a reference to David McConnell’s days selling the works of Shakespeare, the Bard from Stratford-On-Avon. Jerry joined Avon’s board of directors in 1940 and served for 35 years. The company went public after the Second World War, and the stock took off during the 1950s and 1960s.
Jerry was an entrepreneur with a wide range of interests. He owned a crabmeat processing plant in Beaufort, South Carolina, a cable television company in Carmel, California, a sailboat manufacturer in Nevada, a Swiss bank in Zurich, and a 30,000-acre sheep and cattle station in New Zealand. Howard Hughes had his headquarters in the Las Vegas office complex Jerry built in the mid-1970s. Long fascinated by aviation, Jerry bought Gulfstream American Aviation, the corporate jet manufacturer. Jerry had a passion for flying ever since he saw Charles Lindbergh paraded up Broadway in 1927. The experience moved Jerry to buy an open cockpit plane and learn to fly.
Jerry and Theodora separated in 1955 and divorced in 1960. In 1964, Jerry married Mary Hollingsworth. They had homes in Los Angeles, Las Vegas, and Colorado.

In 1957 Jerry established the Alexander Dawson Foundation, naming it for his father and dedicating it to children’s education. Jerry started a summer camp for teens at his Colorado ranch in the Rockies at Stapps Lake in 1969. He soon decided to expand the program and built a boarding school, the Colorado Junior Republic, on a horse ranch he owned in Boulder County, Colorado. This was the early 1970s, a time of Sgt. Pepper and Lt. Calley. Jerry didn’t like long hair on boys. He couldn’t stand rock and roll, which he defined as any music written after 1945. He believed in freedom, hard work and self-reliance. He believed America was the greatest country in the world, that capitalism was the best economic system and together they offered astounding opportunity. While Timothy Leary was telling kids to “Tune in. Turn on. Drop out,” Jerry was telling them, “Work hard. Love your country. Get a haircut.” Nothing Without Labor. Love of the Land.

The Colorado Junior Republic educated teenagers “who didn’t succeed in traditional classroom settings.” Some of the kids had minor scrapes with the law. Many smoked marijuana. Some hadn’t done anything wrong at all; they just had screwy parents. “Wards of the court” they were called then; “foster children” is the term now. They all had IQ’s of 130 or better.
Bringing teenagers that smart, with those problems, during those times, together with Jerry Henderson would be like smashing matter with antimatter, one would think. Well, one would be wrong. Oh, they complained, all right, and Jerry was always willing to listen and always ready with an answer. One boy, unhappy with the school’s prohibition against long hair, argued his case to Jerry. “After all,” the student said, “Jesus Christ had long hair.” Jerry smiled and said, “Son, when you can walk on water, you can have long hair.”

They didn’t like his rules, but they loved Jerry. Most of them, anyway. That’s because those kids instinctively knew something that many adults didn’t realize. Jerry was their ally. Here was a five-foot-five, 140-pound, bald Force of Nature who was ticked off at their parents even more than they were. “There are no delinquent kids, only delinquent parents,” Jerry would say. He thought couples ought to get a license to prove their fitness to be parents before being allowed to have children. After all, he would say, we need a license to drive.

I’m sure those kids found Jerry’s thinking radical. But I think what some found most radical about Jerry was something they had never come across before, an adult who cared about them. Jerry didn’t try to get them on his side. He let them know he was on their side. He kidded with them, and he took them seriously. He listened to their complaints. He argued with them. He broke up fights. He broke bread with them. So the boys got haircuts, and they put on jackets and ties for dinner, and the girls wore dresses. They studied. They worked. They still listened to rock and roll, but they turned down the volume.
Jerry would be the first to admit that he was not an educator, but in education, as in so many other things, Jerry was ahead of his time. Concepts that have come into the mainstream today would have been familiar thirty years ago to anyone who knew Jerry. Educating the whole child was something Jerry was doing when he conceived the Colorado Junior Republic. The school was a microcosm of American society, and its students were “citizens” responsible for their own government and judicial system. They had elections and town meetings. If they got good grades, they could learn to fly at the Republic’s flight school. They were paid in the Republic’s currency for working on the Republic’s ranch, farm, slaughterhouse or print shop, and they saved their earnings in the Republic’s bank. When they graduated, their savings were converted into American currency. The aim was to build self-reliance, self-esteem, and self- respect while teaching students to be members of a society. “The Colorado Junior Republic is a total learning experience, that strives to help youngsters become good citizens of any community,” states one of the school’s brochures from the early days.

Schools nowadays talk about educating life-long learners. That describes Jerry perfectly. He never stopped learning new things. He learned to play the organ in his 70s. He was also past 70 when he got his helicopter pilot’s license. He didn’t have many passengers, but that didn’t stop him from flying.

Jerry was perpetually curious, especially about technology, and he had the means and temperament to indulge his inquisitiveness. When a new subject piqued his interest, such as cable television, lasers, hydroponic farming, or jet aviation, he learned as much as could, sought those who were willing to teach him, and started a company. Jerry wasn’t afraid to try new things, even though he wasn’t an expert. He was willing to find out for himself. Not bound by custom or convention, he was looked at old problems in new ways and often came up with original ideas. He experimented with underground living, building an underground home by Stapps Lake in Colorado and a 6,000-square-foot underground home in Las Vegas. He started the nation’s third cable television system. He also started one of the first burglar alarm manufacturers after someone stole a potted geranium from his front porch.

Educators will tell you the best way to learn something is to engage in an activity that requires the skill or knowledge that one wants to learn. This idea goes by different names, active learning, experiential education. Jerry instinctively knew that long before that idea became popular in schools. When Jerry was in his fifties, he wanted to learn about electronics so he got a job in the workshop of an inventor by offering to sweep the floors for free. That way he could hang around the shop and get a feel for what goes on there. His employer didn’t know his janitor was a multi-millionaire until Jerry decided to start his own electronics company and hired his startled boss.

Above all, Jerry was an optimist. He looked for the positive in life and for the good in people. Jerry died in 1983 and is buried on Laurel Hill Plantation in Beaufort, South Carolina. On his gravestone is one of Jerry’s favorite sayings, “If your hands are clean, your cause is just, and your request is reasonable, you cannot be denied.”

February 25, 2005, marked Jerry’s one-hundredth birthday. His legacy could be measured in companies started and in dollars earned, but more importantly, it can be measured in the lives of those who knew him, the people he worked with, the citizens who passed through the Colorado Junior Republic and in the past, present and future students of the two schools that share his ideals.

For more about Jerry, go to www.hendersonfamilytree.com/Jerry/Jerry.html