SOME HISTORY OF DAWSON'S CAMPUS


Dawson's physical campus has had a remarkable history, since its founding in 1970 to the spectacular 107-acre campus we enjoy today. ﻿The Dining Commons represents the first new building added to campus in 20 years.

Dawson was founded by G.B. "Jerry" Henderson, who named the school after his father. The school launched as the Colorado Junior Republic in 1970, where "Nothing Without Labor" and "Love of the Land" came together to give students a chance to learn by doing, whether on the farm, in a classroom, around campus, or on the athletic field.Time was split between a nearly 800-acre Lafayette campus and a 320-acre ranch at Stapps Lake near Ward. The cottages were dormitories, and there was a landing strip where students learned to fly. One can see the genesis of Dawson's commitment to outdoor and experiential learning, which is foundational to our program still today. The Green, the new campus 'quad,' will ensure that priority continues for years to come.

Intervening years saw the campus transition from boarding to day school, from all-boys to co-educational, and from upper school only to grades K-12. The Middle School grew into its own building in 1992, at which time Henderson Hall was also remodeled. In 1997, the Lower School was built.

Always an explorer and innovator, Henderson imbued Dawson's program with those passions - again, a hallmark of our school that has remained constant, even as trends and best practices in education change. Dawson's new Learning Commons and Innovation Center will ensure that today's - and tomorrow's - students have a place to explore and innovate. 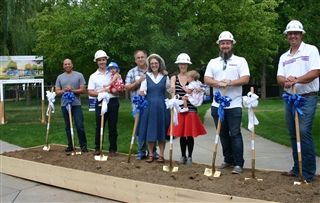 Changes on campus have elicited fun memories from alumni. We were delighted to have a group of alums join us for the Dining Commons groundbreaking in July, including Christopher Henderson ('85) who got his pilot's license in the days there was an airstrip on campus! (Where Transportation is now.)

The demolition of the old 7/8 Science/Math building prompted comments:

"We made a horror film in the basement for Jared Katzman film class. Great, scary times."
- Bowen Paul Jiang

"I can't even begin to count how many Stampede summer camp kids begged...to visit the 'haunted' 7/8 building, where we pretended to run away from ghosts who absolutely must have lived there! We created countless tales and sightings. What fun we had!"
- Peggie Tyler Brooks

"That was Brad Lee bomb making lab!"
- Peter Lamy
"I have absolutely no idea what you might be alluding to. I was a darling little angel at that age."
- Brad Lee

* Stay anchored in Dawson's Strategic Plan - our vision for Dawson's best future.
* Invite full community participation - trustees, families, students, alumni, faculty, staff.
* Utilize best-in-class guidance and partners throughout design and construction.
* Make choices based on what is essential for our students' success.
* Live our commitment to today's best practices in sustainability and the environment.
* Ensure new facilities complement and integrate with current campus look and feel.
* Be fiscally responsible. Design spaces for maximum, multi-purpose, flexible use.